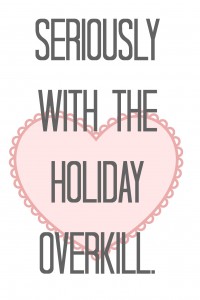 I enjoyed this post on Rage Against The Minivan about “Holiday Overkill.” It starts out with Kristin, a mother of four, discovering that someone at school had told her kids that on St. Patrick’s Day, you set out a trap for leprechauns and then there are gold coins in it the next day. Yeah, I had never heard of that either. As Kristen put it:

Gold coins? A leprechaun trap? Is he serious? When I was a kid we celebrated St. Patrick’s Day by wearing something green. THE END.

She then goes on to say:

Yes, I’ve turned into a bit of a grinch, but SERIOUSLY WITH THE HOLIDAY OVERKILL. As if Christmas wasn’t already hard enough as a parent, someone also decided that we have to move an Elf around every day, into creative tableaus? And then someone else decided that the Advent Calendar was A Thing beyond a simple religious observation and now involves some kind of gift each day leading up to Christmas?
And less than a month after having survived that whole mess, we’ve got Valentine’s Day which has became The New Halloween, because God forbid you send a simple store-bought card. You’d better include some candy or your child will be shunned. Shunned! … And do not even get me started on what Easter has become. When I was a kid my mom went to the store and bought us a new dress and a pre-made plastic Easter basket for $8.99. THE END. There was candy and we loved it. Maybe we would die some eggs from a kit sitting in the check-out lane at Target. They would look like crap. Now we’ve got to leave footprints from the Easter Bunny and make artful, Pinterest-worthy eggs with stencils and ikat prints and probably some that are hombre.

Pretty funny stuff, plus she makes some good points in her rant. She calls it a “We’re all in this together, let’s simplify!” manifesto. Read the rest here.
What do you think about holiday overkill?