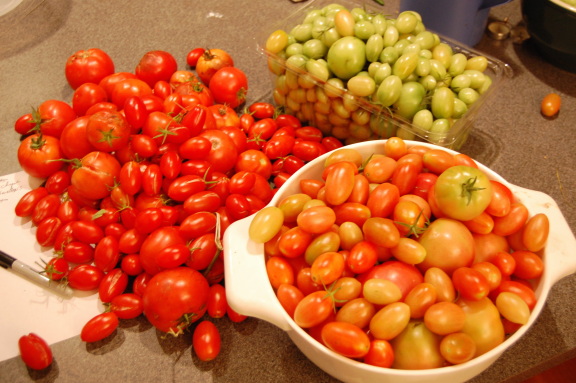 Yesterday, I picked the rest of my tomatoes and peppers and pulled up the plants. My spring garden is officially done.
There is nothing so humbling as trying to keep a lot of plants alive. Every year, I have a share of failures, and this year was no exception. For one thing, there were gophers, which I was reluctant to trap and thus allowed to become a far worse problem than they could have been if I had sucked it up and killed them like a responsible gardener would have. They killed a lot of plants, including a 3-foot fennel plant, a lime tree, an entire row of green beans, and two artichokes–despite the fact that the artichokes were planted in gopher baskets.
Other mistakes: I got lazy about checking the squash plants for infestations around late July and they got a terrible case of aphids. I planted three baby tomato plants in the middle of a wind storm and they all snapped at the base–I had to buy three more plants. I waited too long to harvest my potatoes and they rotted. Etc.
All that said, this was one of my most successful gardens ever. I picked 2,946 tomatoes from just three plants. I got zucchini as big as my leg and yellow squash as big as a baby’s head: We had a surprise nectarine tree in our backyard that grew out of no where and produces 27 nectarines its first year. I planted melons for the first time and had more than I knew what to do with. We had to purchase a freezer for the garage to hold all the extra food, and we will be eating out of this garden until well into next planting season.
Here is the final garden tally of all my plants:

Overall I estimate that the garden saved me $500. Next year, I plan to search out free sources of plants and mulch to up that number. I am also wondering if it is worth it to plant something like radishes that are so cheap in the store. I estimate that my 47 radishes probably equal about 10 bunches of radishes from the store, or about $4 worth of food. Subtract that from the cost of the seeds, $2, and we’re talking only $2 in savings for planting radishes. On top of that the radishes didn’t taste any better than what you get in the store. Now, compare that to the leeks. I estimate that my 28 leeks equaled about 10 bunches of leeks in the store, or about $50 worth of food. Subtract that from the cost of the starter plants, $4, and we’re talking $46 in savings. So as you can see, the cost of the food will enter in a lot more when I plant next year.
Things I did that worked well this year: I bought healthy-looking plants from a reputable nursery. I did soil testing of the ph balance and nutrients and then bought organic fertilizers that replaced the missing nutrients. Most of all, I put in an irrigation system, which more than anything else is why I had such a good yield.
The rest was all nature’s work, which continues to amaze me every day I do this.