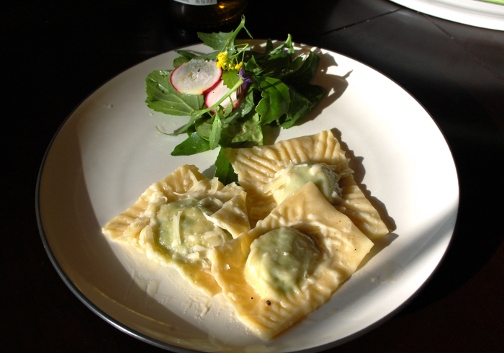 On Saturday, I pulled up the rest of the fava bean plants. Last time I grew fava beans, I only yielded 100 beans or so. This time I have 3 buckets full of beans! Clearly, I thought to myself, it is time to do something with them. So I decided to make fava bean raviolis.
To do this, I pureed the fava beans with leeks and garlic (also from the garden) and stuffed them in homemade pasta dough (using eggs from the chickens). The fava bean filling was bright green, which looked lovely, and dressed in a butter-sage sauce… well, let’s just say this is one of the better dishes I’ve come up with lately. Here’s the recipe:

Directions:
Make the dough. I have gone over how to make the dough before in the Zucchini on Zucchini Raviolis post. That post also goes over how to close and crimp the raviolis, if you need a refresher.
Let the dough rest for about a half hour. Meanwhile, make the filling. First, shuck the fava beans. As I mentioned in the this post, fava beans have two layers, the pod and a bitter membrane that you have to remove. To remove the membrane, pop the fava beans in a pot of boiling water. Let boil for 1-2 minutes, then transfer to an ice bath. The membranes will come right off: 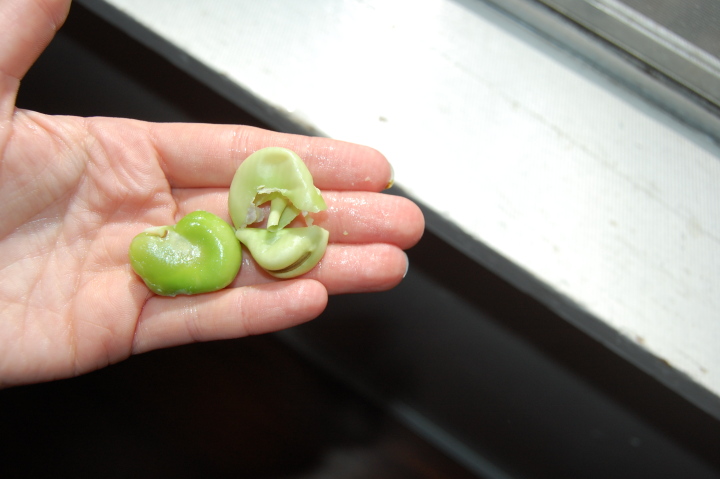 In a frying pan, heat the garlic and olive oil together for about a minute. Add the leeks, fava beans, peas, pepper, and salt. The peas are optional, but they give the filling a bit of extra sweetness. Cook until soft, then puree in a blender. Taste the filling to make sure there is enough salt.
Next, assemble the raviolis. After you stretch out the dough by hand or a machine, spoon the fava bean filling onto the ravioli. Using an egg wash, close and crimp the raviolis.
I used about 2 Tbs of filling per ravioli, which made them pretty big. 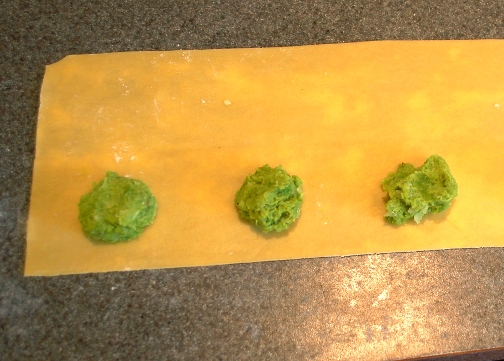 To cook, bring a pot of salted water to a boil. Gently transfer the raviolis into the pot and cook until done, 3-5 minutes.
Meanwhile, melt 1/2 stick of butter in a frying pan. Add the sage leaves and let toast a minute. Add the pepper.
Ladle 1/2 cup of the boiling pasta water into the pan and let it reduce about a third. Turn the heat down to low and carefully transfer the cooked raviolis into the frying pan. Spoon the sauce over them. When they are all in the frying pan, add the cheese and gently toss until it is melted. Transfer to a serving dish and add more cheese, if desired.
We served the raviolis with a salad of arugula, spring flowers, radishes, and homemade lemon confit. It complimented the raviolis perfectly. 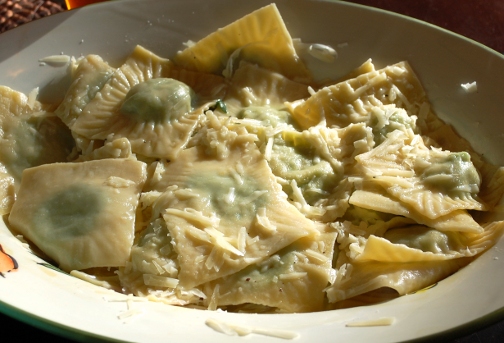 Incidentally, almost everything in this dinner came from the yard. The only ingredients that were from the store were the peas, olive oil, butter, salt, pepper, and cheese. So this meal, while labor intensive, was very cheap. I serve three people for under $3, and it tasted like something from a fancy restaurant. I don’t say that to brag, just to point out that there are other ways to save money on your grocery bills than extreme couponing.