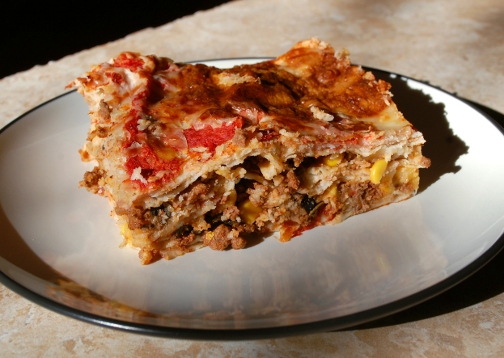 Behold, last night’s dinner: enchilada casserole. It’s like lasagna, but with Mexican flavors. Instead of noodles, you use tortillas and instead of tomato sauce, you use enchilada sauce, etc. I am not sure how authentically Mexican it is, but it tastes good.
Enchilada casserole is also fairly economical, especially since it is a great way to use up stale tortillas. I also used frozen tomatoes from last year’s garden instead of salsa and homemade chorizo sausage instead of all ground beef, thus further reducing the cost of the dish. If you don’t happen to have chorizo around, you can just use ground beef instead.
This dish generates plenty of leftovers and is a hit with kids. Here’s the recipe:

Directions:
Preheat the oven to 350 degrees.
Heat the olive oil in a pan. Add the chopped onions and cook until soft. Add the meat and cook, stirring frequently, until meat is brown.
Combine the tomatoes and enchilada sauce in a bowl. Pour half the sauce into meat and stir.
Add corn, olives, spinach, pepper, rosemary, and oregano to the pan. Cook over medium heat until the spinach has wilted. Taste the meat. If it doesn’t have enough flavor, add some salt and pepper.
Now assemble the casserole. Grease a 13X9″ lasagna pan. Put a little bit of the sauce in the bottom of the pan and spread it around.
Get out 4 tortillas. Dip each tortilla in the sauce, then lay it in the pan, much like you would with lasagna noodles. I ripped two tortillas in half to make sure there would be no gaps and that I would have a solid layer of tortillas.
Spread half of the meat mixture on top of the tortillas and then put 1.5 cup of cheese on top of the meat.
For the second layer, repeat with 4 more tortillas, the rest of the meat, and another 1.5 cup of cheese.
To finish, top with another layer of 4 tortillas that have been dipped in the sauce. Drizzle the last of the sauce over the top of the casserole and add the remaining cup of cheese.
To cook, cover the dish with foil and cook for 30 minutes. Remove the foil and broil the casserole until golden, for approximately 5 minutes. (Watch it to make sure it doesn’t burn.)
Let the casserole sit for 5 minutes so the cheese can congeal, and serve as you would lasagna. Enjoy!