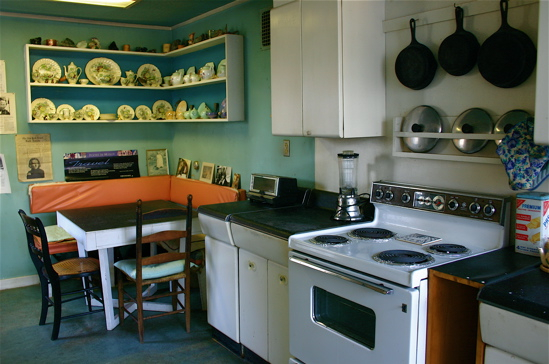 Apartment Therapy has a great story on Edna St Vincent Millay’s house in New York. Millay was one of the most famous poets of the 20th century, although today she’s mostly remembered for this little ditty:

First Fig
My candle burns at both ends;
It will not last the night;
But ah, my foes, and oh, my friends–
It gives a lovely light!
Anyway, Millay lived in this farmhouse from 1925 to her death in 1950. The house didn’t have hardly any electricity.

A former dairy farm, the hilltop estate was yet to be electrified, so depended instead on a small gasoline-fueled generator for power. This generator usually produced enough juice to keep the lights on and the radio playing, but was in no way up to the task of keeping modern kitchen appliances purring along. And so, the couple continued to make do with an icebox and wood-burning stove years after technology was to seemingly render both obsolete.
But none of this could stop Steepletop from gaining notoriety as a hotspot for entertaining. The couple shipped in a mahogany bar from an Albany speakeasy (complete with bullet holes!) and installed it in their garden. The two spent many summer afternoons and evenings with friends mixing up cocktails, poolside. Gin – and sometimes local applejack – was always a favorite pour. 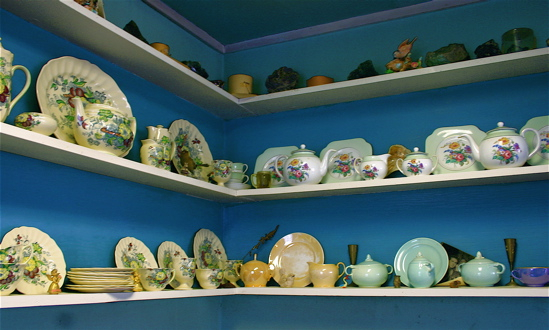 In 1949, Ladies Home Journal got a hold of the story and re-did Millay’s kitchen for her. Today it looks pretty much the same, only tempered by age and its country exterior. I love the use of blues in the room. Also this is a great way to store pot lids: 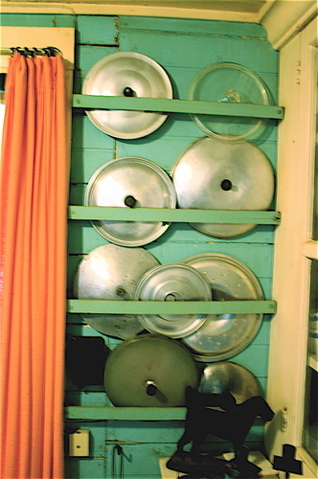 More of the house here.