Apparently, you don’t have to live in upstate Vermont to make your own maple syrup. Ava Chin of this NYTimes blog decided to tap a maple tree in Brooklyn to make her own syrup…and it worked.
You do need certain weather conditions, namely “a period of hard frost, followed by warmish days of 40-plus degree weather with evening temperatures that dip to freezing,” says Chin. If you live in these conditions–New York, Michigan, and Pennsylvania also have sap-giving maples–you can make your own syrup. All you do is harvest the sap from the tree and then boil it into syrup. The process is called sugaring.
Chin tapped the tree using equipment from the hardware store, and was rewarded with 2 gallons of sap:

I held my breath in anticipation, but seconds later the sap began overflowing, even spilling onto the drill. Tree sap is watery and slightly sweet, not hard and stiff like resin, and reminded me of the way I had imagined rivers tasted in novels, where after a long day’s journey, horseback riders drinking from the running water always invariably said, “That sure is sweet!”

After getting the sap, she goes over how to turn it into syrup. Looks like it is a matter of boiling it. And the resulting syrup?

A warm spoonful of it revealed a concentrated sweetness that felt fully realized, old-fashioned, and mellow, without the cloying heaviness of store-bought, which is sometimes just glorified corn syrup. 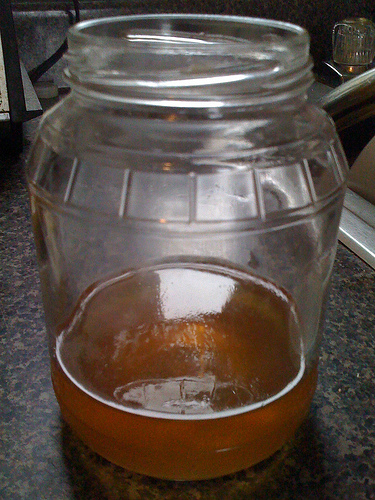