What do you think of Craft Wars, the TLC reality show competition around crafts? Three people are challenged to make a craft out of specific material and three judges pick the best one. The winner gets $10,000. For some reason, Tori Spelling from 90210 is the host of the show.
I recently watched the first two episodes and thought the show was a missed opportunity. There are so many amazing craft people out there, and the show doesn’t seem interested in showcasing them. Instead, it is promoting the kitchy side of craft, the kind of thing where people make bags out of sports equipment: 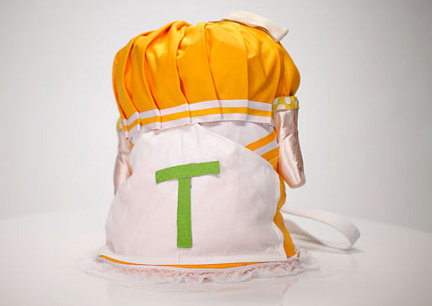 Or bird houses with playing cards glued to the top: 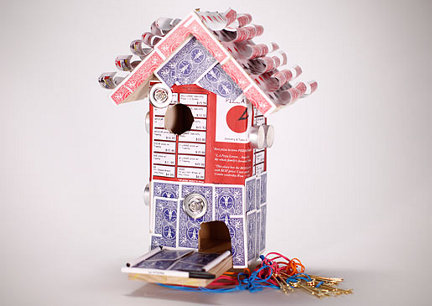 The New Yorker has a review of Craft Wars. The writer didn’t like the show, and I can’t help thinking she makes some good points. I also like that she went into what the word “craft” used to mean:

Craft used to mean something, and it would never have been made with Mod Podge. You can buy a tea towel with the William Morris quotation, “Have nothing in your house that you do not know to be useful, or believe to be beautiful.” (It is a hundred per cent linen, so it is both.) What Morris, a designer, entrepreneur, futurist, and leader of the late nineteenth century Arts and Crafts Movement, proposed was a return to the medieval craft tradition, in which objects were made by hand by skilled workmen, and priced accordingly. Rather than three sets of elaborately decorated transferware china, you would have one set of handmade and glazed plates. Rather than rooms full of elaborate Victorian furniture, you would own a few chairs, hand hewn and joined with wood, not industrial glue.

I love that quote, “Have nothing in your house that you do not know to be useful, or believe to be beautiful.” This is my ideal and a standard I am always trying to move closer to in my own home. (And here I thought I made the concept up!)
By the way, PBS had an excellent series called Craft In America that goes over the more serious, less kitchy side of craft. And you can watch the whole thing online for free!