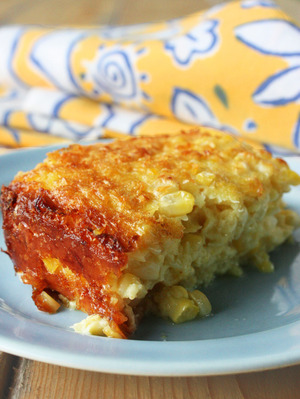 NPR is declaring that corn pudding is better than sex. “You can grate the kernels off, or cut them off and then blend them into a sweet, sunshine-yellow hash that slides smoothly into a simple milk-and-egg batter. In the batter, melted butter once again becomes one with the corn. The eggs give it lift, the flour binds it together, the crust turns to gold, the earth moves.”
Whatever. It looks pretty yummy. Maybe I am going to have to make one of these recipes. Like this one:
Simple Corn Pudding
Ingredients:
6 Tbs unsalted butter
5 or 6 ears of corn, husked (depending on size)
1/4 c sugar
1/2 c heavy cream or milk
1/4 c flour
1 tsp salt
5 large eggs
Directions:

Preheat the oven to 350 degrees. Place the butter in a baking dish (an 8-by-8-inch glass baking dish or iron skillet works well) and slide into the oven so the butter melts while the oven is preheating.
Using a box grater, coarsely grate the kernels off four ears of corn. Use a sharp knife to cut the kernels from the remaining ears. Combine the corn kernels, sugar, cream or milk, flour and salt in a large mixing bowl. Lightly beat the five eggs and add to the mixture.
When the oven has preheated and the butter in the baking dish has melted, carefully tilt the melted butter from the baking dish into the corn mixture and combine with a few swift strokes. Then tilt the buttered corn mixture back into the baking dish.
Bake for 60 to 70 minutes, until a golden crust has formed and the interior has set.

There are also two other variations of the dish on the NPR site.