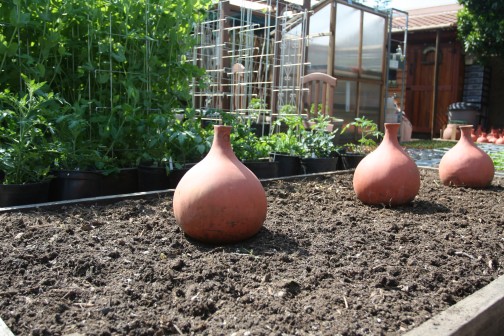 (Via Urban Homestead)
I am interested in reducing water usage in my garden, so I have been reading up on various methods to do that. One of them is using a clay pot to irrigate, which I was reminded of by this post on Urban Homestead. They use ollas, pronounced OH-ya, to water their plants. This is an unglazed, terracotta pot that you bury in the ground next to your plant and fill with water. The water seeps out of the clay and is seized by the roots of the plant. According to Urban Homestead, “Plants love them, when removing them this past winter, they were hugged by roots of vegetables that had grown with them that past summer.” 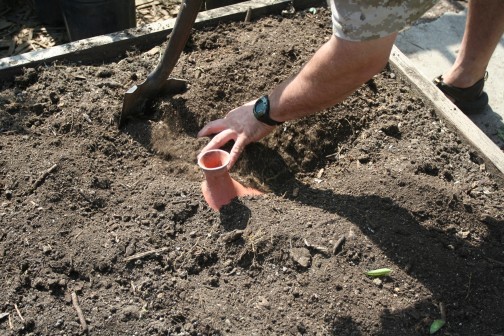 (An olla buried in the ground.)
Currently, I use drip irrigation. We have connected a hose to a timer and every morning, water is sent through the hose and distributed to the roots of the plants. It works well, but I still wonder if there is a better way.
Urban Homestead says that by using ollas throughout the yard “over the last three years have cut our water usage in 1/2.” I wonder how that compares to drip irrigation. Because the olla is buried underground, there would be less evaporation in the air, so it may use less water. Also, the plant could take exactly the amount of water it needs whenever it wants it. With drip irrigation, you sort of guess how much water the plants need, which can lead to over- or under-watering. Because of this, clay-pot irrigation would probably be less stressful to the plant.
On the other hand, sounds like ollas are more work, at least for me. Since I have automated my watering, I don’t have to water my plants. With an olla, I would have to fill it frequently, plus watch it and make sure it isn’t empty. (However, if you don’t use drip irrigation, an olla would cut down your workload, since you would fill it less frequently than you would have to water the plant with a hose.)
Darn it, now I am obsessed with making an experiment. Here is what it would look like: I would have two plants, the same kind, planted side-by-side, under the same conditions. One would be watered with an olla, the other with drip irrigation. Throughout the season I would measure the water going into each plant as well as the yield of the plant. At the end of the season, I would compare and see:
a. whether one plant used less water than the other.
b. which plant yielded more food overall.
Tempting…
You can buy ollas here and here.