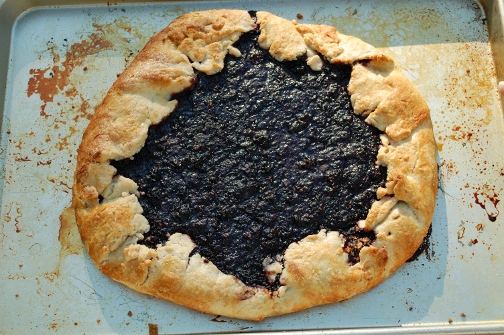 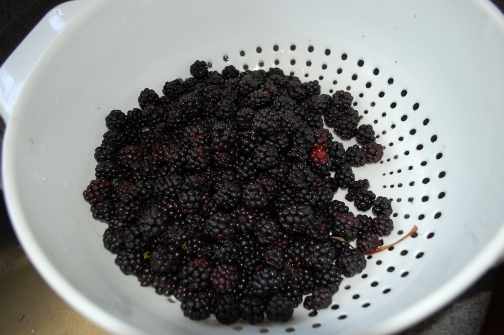 For this recipe, I adapted this plum galette from Martha Stewart. It has an almond mixture on the bottom of the crust that absorbs some of the moisture and keeps the blackberries from running over in the oven.
And I must say, this was a delicious recipe. I served the blackberry galette at a dinner party, and it went pretty fast. 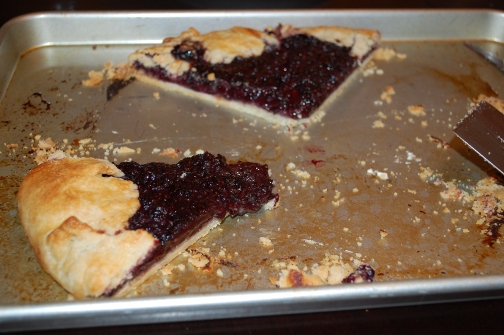 By the end of the night, there was only one piece left. Which I ate. 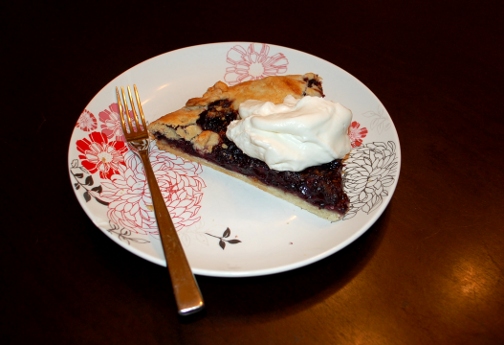 For the almond filling:

For the blackberry filling:

First, make the crust. Combine 2 1/2 cups flour, butter, salt, and 1 tsp sugar in a food processor and mix until it “resembles a course meal,” according to Martha. Sprinkle in 1/4 cup cold ice water and mix until dough holds together. If you need to, add more water a tablespoon at a time until the dough seems the right consistency.
Roll the dough onto a floured surface and shape into a disc. Wrap in plastic wrap and stick it in the fridge for one hour.
Next, prepare the blackberries. If using foraged berries, carefully wash any dirt off the berries. Drain. Stir blackberries in a bowl with lemon, cinnamon, 1/2 cup flour and 1/2 cup sugar. Taste and add more sugar if necessary. Cover and stick in the fridge for an hour so the juices can combine.
When the hour is up, make the almond mixture. Add almonds, 3 Tbs sugar, and 2 Tbs flour in the food processor and pulse until it becomes a course meal.
Preheat oven to 350 degrees.
To assemble the galette: Roll out the dough to 1/4-inch thickness. The dough will be tough because it has been in the fridge, but will yield more as it gets closer to room temperature.
When the dough is ready, move it to a cookie sheet that has been sprayed or brushed with cooking oil. Sprinkle almond mixture over the dough. Carefully spoon the blackberry mixture on the almonds and spread around, leaving a 2-inch border around the edge of the galette.
Fold the edges of the dough over the fruit.
Refrigerate 20 minutes to help everything firm up.
Brush the crust with cream and sprinkle 2 Tbs sugar around the edge of the galette. Cut up the butter and sprinkle on the top of the blackberries.
Bake until the crust is golden and the underside is done, between 50-70 minutes.
To serve, let the galette cool, then cut into pieces like you would a pie. Dollop with homemade whip cream or vanilla ice cream. Enjoy!