Our beer is done! I have to say, it surprised me by how good it was. I tastes as good as most beers you get in a bar. The process, while complicated, has converted me to beer making. You really do get high quality beer for minimal actual work–it’s just the waiting to drink it that’s difficult.
I left off with the beer sitting in a bucket fermenting, which means the yeast is eating the sugar and converting it to alcohol. We left the beer in there for two weeks, until most of the bubbling activity stopped and the kreusen (the foam at the top) settled to the bottom of the bucket. That was how we knew the yeast was done eating the sugar. Then we transferred the beer to a secondary fermenter (a different bucket) so we could remove it from the yeast cake. You do that so that everything left suspended in the beer can settle out.
After a week, we took a couple of hydrometer readings to double check that the beer was done fermenting. It was, so it was time to bottle.
At this point the beer is flat, so we needed to add something to the party to get the yeast going again and make carbonation. That meant sugar water. So we made a syrup out of sugar and water and put it in the bucket. Then we carefully siphoned the beer on top of it into a sanitized bucket.
After that, you siphon the beer into the sanitized bottles and cap them with sanitized caps (we used a dishwasher to clean them using the “sanitize” option, no soap). The beer was now bottled! But we couldn’t drink it right away (of course…) because carbonation had to build up, so we let it sit in the bottle for 2 more weeks. Finally, it was ready to drink. 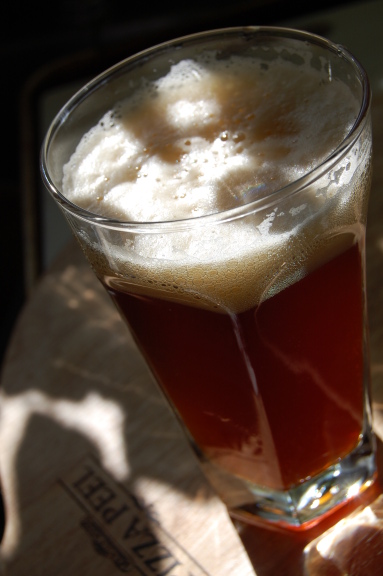 Overall, the beer took 5 weeks–2 weeks in the first bucket, 1 week in the second bucket, and 2 more weeks in the bottle. We ended up with 42 bottles of beer. It was a successful first time home brewing.