In March 2010, we got chickens. Now that they are a year old, I thought I would talk about my experience of owning chickens.
We ended up with three hens. Rosie, the Rhode Island Red: 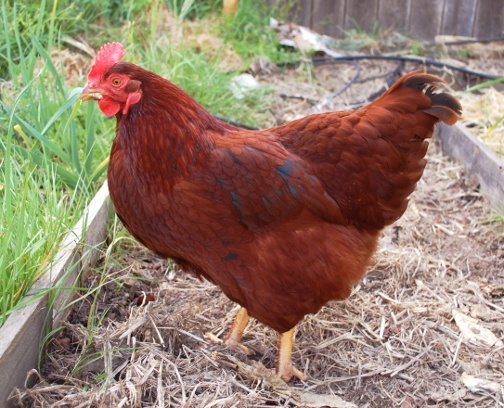 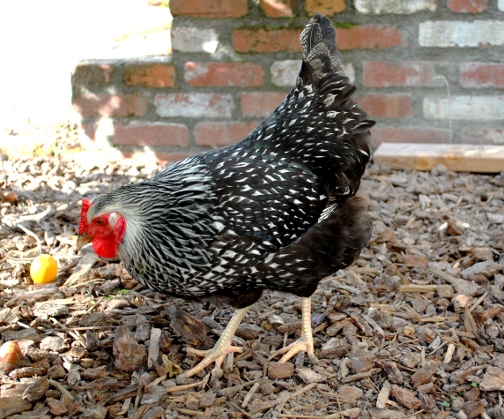 and Olivia, the Columbian Plymouth Rock: 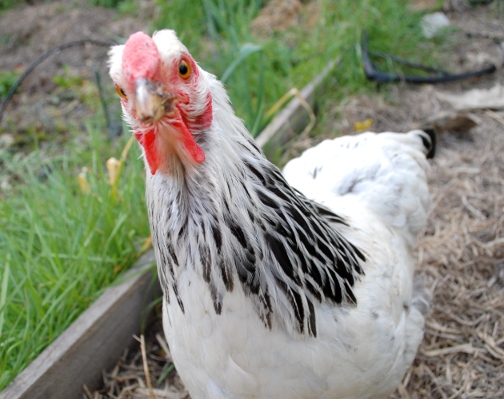 In general, I would say most of what you hear about chickens is true. They are not very smart. They need to be protected, as they are oblivious of and delicious to many predators. They don’t have much concern about where their poop is and whether they are standing in it–however, I found them easier to clean than you would think. (More on that in a moment.) They’ll hurt your garden if you let them, but on the other hand, a steady supply of eggs is well worth any hassle.
Let’s break owning chickens down:
The Eggs–Whenever I go out to the pen, there are usually 2-3 eggs waiting for me. Penny started laying on June 10, 2010, and the other two chickens–who are slightly younger–started in November. Since then, I have brought in 338 eggs in 302 days, and I expect that to increase now that they are adults and all laying. They have only stopped once for a period in the winter to molt, i.e. lose their feather and replace them with new ones.
On top of that, the eggs are so flavorful, they don’t need salt. The yolks are orange when you crack them. It’s nice to never have to buy eggs in the store, thus saving me money, and since there is a lot of cruelty associated with chicken farming, it’s nice to not contribute to that as well.
The Fertilizer–Chickens have a reputation for being filthy. And they are in the sense that they aren’t aware of their poop and will stand in it, roll in it, etc. But the truth is, most of the filth that people associate with poultry comes from shoving many chickens into a small space. I only have three chickens, and since they have a big pen and a yard to roam around in, things just don’t get that dirty. Also, chickens have a natural cleaning mechanism, which is that when they scratch, they turn their into the soil. When that happens, the feces become fertilizer. In fact, my original plan was to move their pen into the vegetable garden and let them fertilize the tomato patch all winter, but we didn’t get around to it. (I may still do that.) In terms of cleaning, the only things I have to do is remove the dirty hay from their pen about once a month, which I add to the compost bin. Eventually, it will break down, turn to compost, and be added to the vegetable garden, thus enriching the plants that give us food. Nothing gets wasted in this system.
Waste Eaters–Which brings me to my next point: feeding chickens is easy. I give them a lay mash of corn/grain/etc. to make sure they get a steady base of nutrition, but I also supplement their food with kitchen waste. As such, these chickens eat pretty well. If I’m making a salad with spinach, I save them the stems. If I’m preserving tomatoes, I give them the mushy parts. For awhile, the neighbor’s plum tree was dropping overripe plums in my yard, and since I didn’t want the fruit to rot on the ground and attract pests, the chickens got a plum a day. No wonder the eggs taste so good!
Weed Killers/Garden Killers–Chickens also supplement their own diet by scratching and eating weeds, grubs, rocks, who knows what else. This means they make great weed killers. I like to let them in the herb garden because they don’t seem to like the taste of the herbs, but they will eat the weeds. The other day, I watched Penny carefully pick out a sorrel weed that was growing in my oregano plant, thus weeding the oregano for me. Good chicken!
On the other hand, this can be destructive in a vegetable garden. They really love tomatoes and keeping them out of my plants last summer was a chore. Right now, they keep trying to scratch where I have just planted seeds. This is mildly annoying, but nothing I can’t handle.

Chickens Are Not Cuddly, But Hilarious–I learned quickly that my chickens don’t like to be touched or petted. But they know who I am. They get excited when they see me because I bring the food. And while they are definitely on the dumb side, they do respond to simple training. For example, my chickens will come when I call them … most of the time.
Also, chickens are like a little comedy routine in your yard. They run around excitedly, take dust baths, make all kinds of funny noises, and are always exploring and getting into trouble. For awhile, Olivia–who is by far the dumbest of the three–went through a dictator stage where she tried to chase everything she saw: my husband, the cats, the wheel barrel, etc. She’s incapable of hurting anything, so it’s pretty funny to watch her fluff up and run at my shoe for no reason whatsoever. Also I am pretty sure she thinks I’m a chicken too. One time I was even involved in henpecking. Rosie, the top hen, pecked Penny, so Penny pecked Olivia, and then Olivia turned around and pecked my hand. (It didn’t hurt.) She sure showed my hand who was the boss.
So in summary: eggs, free fertilizer, weed control, and hours of free entertainment. What’s not to like about chickens? 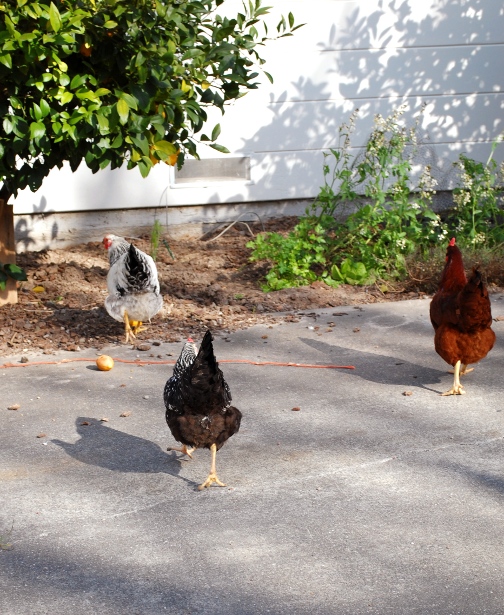 Previous Posts on Owning Chickens:
* Raising Chickens
* Chickens and Your Pets
* Does Having Chickens Save Money?
* Peace of Mind At Breakfast

13 thoughts on “A Year Of Owning Chickens”